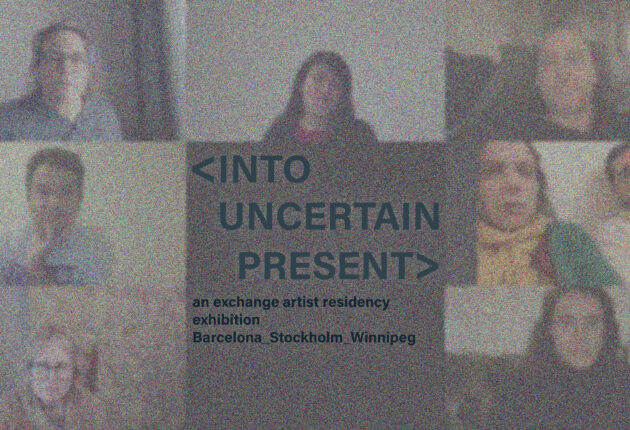 PLATFORM centre is pleased to announce Into Uncertain Present, a group exhibition featuring the work of Anna Ill (UK), Anna López Luna (ES), Chantal Rousseau (CA), Felice Hapetzeder (SE), Mounir Gouri (DZ), Muhammad Ali (SE) and Tracy Peters (CA). Into Uncertain Present is curated by Abir Boukhari (SE) and runs from 30 April – 29 May 2021. The virtual residency is organized by AllArtNow (SE) in partnership with PLATFORM centre (CA), MAWA (CA) and Jiser (ES). The project is supported by Kulturradet (SE), The Institute of Culture of Barcelona City Council and OSIC of the Generalitat of Catalunya

Currently PLATFORM open by appointment. Please note, 5 people will be allowed in the gallery at one time. When visiting us PLATFORM asks you wear a mask, maintain social distancing and to stay home if you are feeling sick. Please email us at outreach@platformgallery.org to schedule a viewing appointment.

“The art residency acts as a mechanism to encourage and support intellectuals, artists, and cultural workers in the process of their artistic research and creative development. It fosters sustainability for the artistic body of ideas in an inclusive open society. The pandemic crisis illuminates the value of creativity, and the ways that new ideas can be generated in uncertain times.

The Strategy for many art residencies have been implemented through the virtual exchanging of artistic experience and many questions have been raised about the digital residency. Would it be more applicable in the future?  Will we develop and adapt new formats for the art residency?

We began to explore the virtual residency format in 2020, and the program will continue with the second edition in 2021. Three events will be organized during the year, in three cities, Winnipeg, Stockholm and Barcelona. The residency process unfolded through webinars, first proposing the project, then giving the artists time to meet, discuss the concept, produce work and finally exhibit in venues in Winnipeg, Barcelona, and Stockholm.

The Albert Camus’s quotation inspired our concept for this version of the residency “Until now I always felt a stranger in this town, and that I’d no concern with you people. But now that I’ve seen what I have seen, I know that I belong here whether I want it or not. This business is everybody’s business.”  The Plague, p.209

In the novel, the narrator is a stranger who finds himself separated from his own home and his wife because of the Plague which invaded Oran City. First, he is looking for a way to escape the city but later on, he decides to stay to support the others in solidarity.

This collective fight against the pandemic leads to equality and belonging, where all people experience a form of exile, live in isolation, separate from their beloved, and fight against death; we are all prisoners, sharing the fear and the uncertainties of the moment.

Do we understand the plague as a collective disaster that we all must fight against in support of each other? Or, do we experience distress as individuals and believe that one’s own pain is unique and separate? Does this encourage solidarity and compassion between humans or is it a reason to blame each other?

For this residency, I invited seven artists to have online meetings using the selected quotation as a starting point, to discuss and share their thoughts, and create work which reflects on the current situation in relation to their own experience.” – Abir Boukhari, Stockholm, 2021

Anna López Luna (b.1983/Barcelona) lives and works between Barcelona and Paris, where she studied at Ecole Nationale Supérieur d’Art de Cergy-Paris. Her work is focused on the body’s perceptions and the relationship between intimate, social structures and historical memory. Her work has been shown at the Les parralléles du Sud – Manifesta 13 in France (2020),  the Fonds d’Art Moderne et Contemporain de Montluçon, in France (2019), the Westfälischer Kunstverein in Münster (2019), the Tabakalera, Donostia in Spain, the Ateliers Sauvages in Algiers, Algeria (2017), Les Bains de Géronde, in Switzerland (2018), the 61th Salon de Montrouge in France (2016), the MUDAM in Luxembourg (2015), the Centre Civic de San Andreu, Barcelona (2010) and at Kulturfabrik in collaboration with the Casino du Luxembourg Forum d’Art Contemporain in Luxembourg (2008).

Chantal Rousseau has been a practicing artist for over 20 years. Her work has been exhibited across Canada and internationally, including: Hallwalls Contemporary Arts Centre, Buffalo; Canadian Cultural Centre, Paris; The New Gallery, Calgary;  Latitude 53, Edmonton; Mercer Union, Toronto; and La Centrale, Montreal. In the fall of 2020 she had a solo exhibition at the Agnes Etherington Art Centre in Kingston, Ontario. In 2020 she was also awarded two temporary public art commissions, one for the City of Kingston, the other for Erindale Park in Mississauga. In April of 2021 she organized EXPO-MOTEL, an exhibition at the motel Le Nordet, working with two local artists and in partnership with the Bureau Satellite Vaste et Vague, a site-specific programming arm of the local artist-run-centre. She will be the first artist at 4elements living arts new mobile studio residency on Manitoulin Island, in May and June of 2021. In 2022 she will be participating in an artist residency at the Klondike Institute of Art & Culture. Chantal Rousseau has been involved in multiple artist collectives, including the Agitated Plover Salon, a group of Kingston-based artists who exhibited in non-traditional spaces in 2013 to 2014, as well as the Toronto-based collective Persona Volare, who were active from 2000 to 2009. She is a graduate of the University of Guelph (MFA), and Emily Carr Institute of Art and Design (BFA). Her work is in the collection of the Agnes Etherington Art Centre, Dawson College, as well as numerous private collections.

Click here to listen to an audio piece Chantal created during this residency.

Felice Hapetzeder is a visual artist (b 1973) with MFA degree from the Fine Arts department at Konstfack College of Art, Crafts and Design in 2002. He is interested in the aesthetics and social context of creative practice as well as cultural heritage production and manipulation of collective memory and oblivion. His methods span across video art, installation, sculpture, workshop-performance and photography. Much of his work can be read as expressing a marginal voice, an independent channel outside the dominant narratives. He works both independently and in collaboration with others; interested in the border between documentary storytelling and dramatization or learning as artistic expression. Hapetzeder also works as an independent manager of art projects, often by way of international exchanges and as an art educator. He is the founder of Samtidskonst i Bro – Contemporary art in Bro community 2017 to current, part of the video art exchange and development collaboration Carousell 2013-2018, a part of the artist duo Local A. 2008-2017 and one of the initiators of ak28 independent art space in Stockholm 2003-2008. https://hapetzeder.com

Mounir Gouri (b.1985 Algeria/Annaba) is a multi-disciplinary artist. He is part of the young generation of visual artists concerned both by his status as an artist but also by what young people of his age encounter on daily basis difficulties on the social, cultural, and political level. Being born in 1985 means having lived his childhood and adolescence in the harsh climate of civil war, which influenced his work. Mounir Works as a multi-disciplinary artist. Gouri participated in several group and solo exhibitions. He received the special prize of the friends of the Institut du Monde Arabe in 2019, as he exhibited in Germany at the Westfalischer Kunstverein in Munster, an exhibition in London at the Mezzanine Gallery participated in the Jafre Biennale and in October 2019 as he was artist in  residency of La Maison des Arts in Malakoff. Recently, he was one of the Algerian artists of the exhibition Waiting for Omar Gatlato comisarié by Natasha Liorens at the Columbia gallery in New York.

Muhammad Ali has a multi-disciplinary approach in his artistic practice, which spans across video, installation, digital art, painting, and drawing and explores how the meanings are constructed and understood. He is often focusing on life as he blurs the boundaries between consciousness and unconsciousness. Muhammad’s work has been exhibit in many countries and venues as Moderna Museet Sweden, AllArtNow Syria, Kalmar Konstmuseum Sweden, Bornholms Konstmuseum Denmark, Porin Museum Finland, Malmo Konstmuseum Sweden, Scope Art New York. He invited to be artist in residence in Boktyrka Konshtall Sweden, Delfina Foundation London and IASPIS Sweden.

Tracy Peters is a multidisciplinary artist based in Winnipeg on Treaty 1 Territory. She uses photography, video and installation to examine the interactions between organic and human-built environments. Peters has received grants from the Canada Council for the Arts, the Manitoba Arts Council and the Winnipeg Arts Council, and has attended residencies which include a partnership between Void Gallery and The Social Studios and Gallery in Derry, Northern Ireland, the ArtCenter/South Florida-MAWA artist exchange program in Miami, Florida, the Plug In ICA Summer Institute in Winnipeg, Manitoba, the Independent Imaging Retreat (Film Farm) in Mount Forest, Ontario, and The Banff Centre in Alberta, Canada. Her work has exhibited across Canada, in Europe and Australia.

Abir Boukhari is a curator from Damascus, Syria, based in Stockholm. She is the director, curator and co-founder of AllArtNow that is considered to be the first independent collective space for contemporary art in Syria, founded in Damascus in 2005, but has since the war broke out in 2012 turned into a nomadic space, working from different places. Since 2019, AllArtNow opened a project space in Stockholm. In Damascus (2005-2012), she run the artistic programme for AllArtNow, and was the artistic director for Living Spaces Festival for Contemporary Arts, the artistic director of Studio1 (an informal school for contemporary arts in Syria) and the co-founder of Boukhari House for Artist Residencies and the culture center Maktab Creative Zone. Since her move to Stockholm in 2015, she curated and collaborated with a number of arts organisations and institutions in the Nordic region and the MENA region, among them: Botkyrka konsthall/Residence Botkyrka (Sweden), Pori Art Museum (Finland), The World Culture Museum in Göteborg (Sweden), KRÆ syndikatet (Denmark), Sörmland Museum in Nykoping (Sweden), Jönkoping Läns Museum (Sweden), Kultivera in Tranås (Sweden), among many others.

Images from Into Uncertain Present