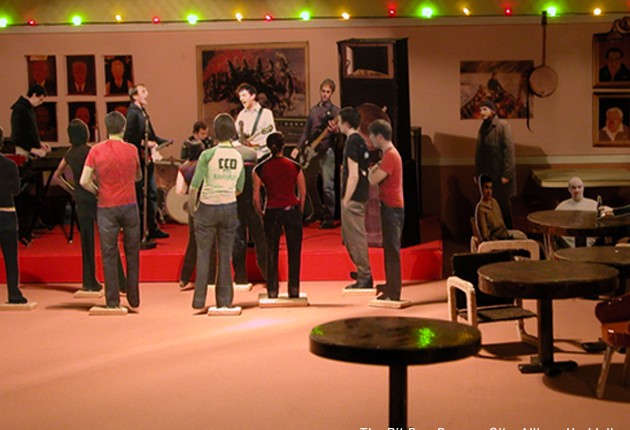 The Canadian North is easily romanticized by someone who has never experienced it firsthand. Having never traveled more northernly than Dauphin, Manitoba, I am probably guiltier than most of falling prey to colonial mythologies of the great, untamed hinterlands. And though I confess to an almost total ignorance of the contemporary Yukon, a recent viewing of Allison Hrabluik’s, The Pit Bar, Dawson City, illuminated the surprising degree to which I have been indoctrinated into a veritable catalogue of Canadiana kitsch. Nowhere to be found in her depiction of the town are the prospector-infested saloons, mustachioed mounties, and grizzly bear-wrestling frontierswomen that populate any good fifth-grade history textbook. Hrabluik exploits and unhinges the viewers’ expectations of these sorts of weatherworn clichés, by communicating an intimate personal experience of a segment of a community that little resembles the folklore that precedes it.

Infamous as the epicentre of the Klondike Gold Rush that witnessed the immigration, (and later, emigration), of upwards of 40,000 largely-European prospectors, Dawson City is now home to a population of about 2,000 permanent residents – some thirty times fewer than the number of people who visit the town annually to partake of the ‘adventure’ advertised on the town’s website. It seems, by outward appearances, to thrive on a tourist industry that capitalizes on the fetishization of, and desire for, an experience of the ‘authentic’, (and imperial), recent past; another website, banking more explicitly on the necrophiliac impulses of the average tourist, invites us to, “turn back the pages of time, and experience…[the town’s]…rich living history.” But to whom does this history – living or otherwise – belong, and who are its inheritors? Hrabluik’s mesmerizing 2004 stop-motion animation video, co-presented this summer by Video Pool Media Arts Centre, and Platform Centre for Photographic & Digital Art, tenderly celebrates a burgeoning youth culture that attempts to negotiate an identity autonomous of Dawson City’s much mythologized past.

The Pit Bar, Dawson City is the third in a body of work that explores the artist’s experiences of socially isolated locales. Perhaps unsurprisingly for someone of prairie extraction, Hrabluik focuses on the individuals situated in these places, and their efforts at navigating a sense of identity within unorthodox, and sometimes trying scenarios. Lofoten Islands, Norway, the first in the series, strips away the romance of life in an isolated northern community where geese appear to outnumber people; the second, Niagara Street, Toronto, chronicles the minutiae of daily life under the grimly-fluorescent lights of an urban meat-packing plant. In all three there is a process of demystification that cuts through the romantic artifice of places whose realities are, by most, little seen and less understood. But where the earlier works convey a sense of fatigue, (and occasional resignation), at the struggle to negotiate a connected sense of self when immersed within sometimes bleak environments, The Pit Bar, Dawson City recognizes and celebrates the potential of this equation.

The work painstakingly recreates a three minute and fifty second-long extract of an evening at a local bar, where Toronto-based indie rock band The Constantines are performing. But Hrabluik’s meticulous and labour-intensive animation process allows her to deviate from a conventional narrative retelling. She video tapes the venue on site, later using the footage to reconstruct a small set of the location. The original video is then played back on a monitor, from which Hrabluik photographs individual – but not strictly continuous – frames. The people that populate these images are cut out frame by frame from the photographs and inserted into the set, where they are animated through a stop-motion process that brings them, stutteringly, to life.

The effect is hypnotic and tender. Hrabluik discards the conventions of traditional animation by rejecting seamlessness in favour of subjectivity; the motions of her jagged-edged figures ultimately function more as a referent to, than a recreation of, the individuals’ actual movements. Through this act of interpretation, Hrabluik’s characters’ are at once miniaturized and writ large, their idiosyncratic gestures amplified by the artist’s distillation of document and memory.

The video opens with the über-cool art-rock band warming up, nicely juxtaposed against the high-kitsch landscape painting – exactly the sort whose romantic iconography has been used to construct southern Canada’s notions of the North – that serves as a backdrop to the stage. A gaggle of twenty-somethings begin to filter into the bar, where they mill about, swig seemingly endless quantities of beer, and play a not-insignificant amount of air guitar. Surprisingly, to my urban-arrogant eyes, there is nothing to distinguish their outward identification with contemporary indie-rock culture from what might be witnessed on any given night at a comparable establishment in Winnipeg, (or Montreal, or Toronto, or wherever else tight black sweaters are ubiquitous). Sure, there are parkas and flannel shirts, (stylish ones, I might add), but there are also the shaggy hairdos and attitudes of affected aloofness that serve as the very calling card of the urban hipster.

Hrabluik’s process doesn’t permit such a dismissive reading of the bar denizens, however. By interpreting, rather than faithfully replicating their movements, she renders individuals where digital animation might homogenize; the scale and aesthetics make tangible for the viewer just what the significance of a rock concert at The Pit Bar might be for its patrons.

Despite the multiple layers of artifice at play, (medial, material, cultural, countercultural), and the suspension of disbelief that is required on behalf of the viewer, there is an honesty and affection in Hrabluik’s depiction of this community that transcends what might be accomplished through more traditional media. As the guitar chords swell in anticipation the characters begin to convene around the stage, their subtly captured gestures suggestive of the sincerity and investment in their undertaking – which represents no less than the carving out of a new cultural identity, autonomous from their enormous history. 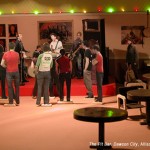