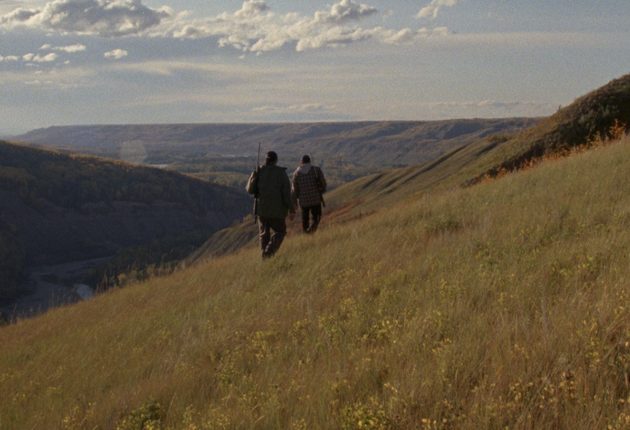 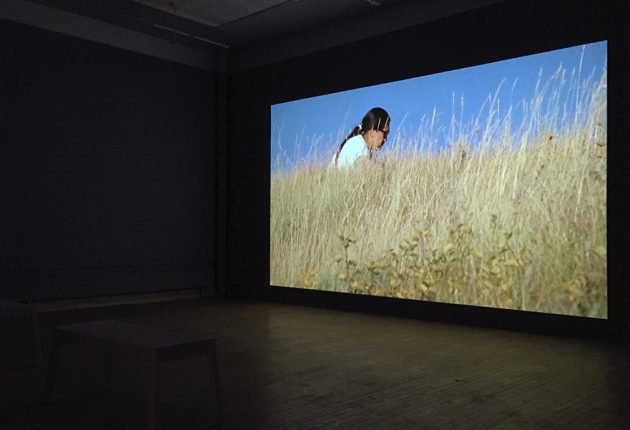 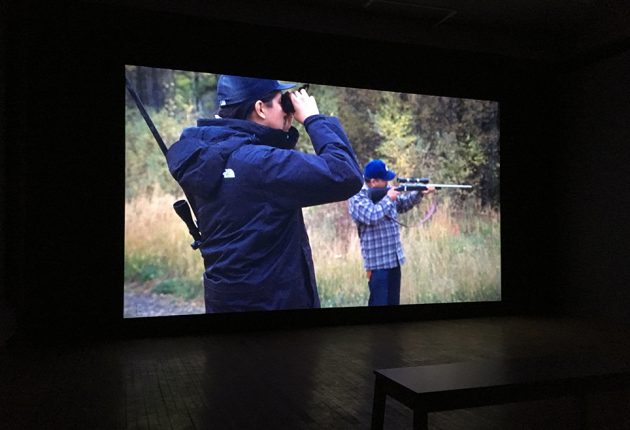 PLATFORM centre for photographic + digital arts in collaboration with WNDX is pleased to announce Modest Livelihood, an exhibition featuring the work of Duane Linklater (ON) and Brian Jungen (BC). The show runs from 09 September – 08 October 2016 and features a written response from Jenny Western (MB). The opening reception is scheduled for Friday 23 September where Duane Linklater and writer/curator Jenny Western will speak about the work. This event is free and is open to the public.

Brian Jungen and Duane Linklater’s film, Modest Livelihood, was created from over 50 hours of footage shot during two hunting trips in the Dane-zaa Territory in Northern BC. The title of the film is in reference to the 1999 Supreme Court of Canada ruling that confirmed First Nations’ hunting and fishing rights but controversially limited their earning to a “moderate livelihood”—not for the “accumulation of wealth.” The footage has been edited into a long format silent film work that blurs the lines between, film, art and documentary and raises questions of determination, representation and the sharing of knowledge. The film follows Jungen, Linklater and Jack Askoty (Jungen’s uncle—a Doig River First Nations elder) through the landscape. The subject matter in the film takes over; the lush landscapes, the Fall colours, the simplicity of their camp, and the subsequent end of the film with the preparation and skinning of the animal.

Inside PLATFORM the film will encompass the entire gallery to create a unique and impressive cinematic spectacle. The 50-minute film will begin every hour on the hour allowing gallery patrons to plan their visit accordingly.

ABOUT THE ARTISTS / WRITER

Sculptor and multidisciplinary artist Brian Jungen employs repurposed materials and a combination of contemporary and traditional techniques; the resulting works often prompt viewers to consider the distances and proximities between cultures, as well as those between humans and nature. A member of the Doig River band of the Dane-zaa First Nation, Jungen came to prominence in the mid-to-late 1990s with a series of masks made of Nike sneakers—a comment, in part, on his own mixed European–Dane-zaa heritage, as well as on the impact of global capitalism on Aboriginal cultures and communities. Later works, shown at the Art Gallery of Ontario, the New Museum and Tate Modern, among other venues, include giant whale skeletons made of plastic lawn chairs, totem poles made of golf bags and a teepee made of black sofa leather. Recent work focuses on conceptual and modernist forms and their relationship to so-called “primitivism.” Among other honours, Jungen won the first Sobey Art Award in 2002 and received the Gershon Iskowitz Prize in 2010. In 2012, he was included in dOCUMENTA (13).

Duane Linklater is Omaskêko Cree, from Moose Cree First Nation in Northern Ontario and is currently based in North Bay, Ontario. He was educated at the University of Alberta, receiving a Bachelor of Native Studies and a Bachelor of Fine Arts. Duane attended the Milton Avery Graduate School of Arts at Bard College in upstate New York, USA, completing his Master of Fine Arts in Film and Video. He has exhibited and screened his work nationally and internationally at the Vancouver Art Gallery, Art Gallery of Alberta, Family Business Gallery in New York City, the Power Plant in Toronto and a recent collaboration with Tanya Lukin Linklater at MOCCA Toronto. His collaborative film project with Brian Jungen, Modest Livelihood, was originally presented at the Walter Phillips Gallery at The Banff Centre in collaboration with dOCUMENTA (13) with subsequent exhibitions of this work at the Logan Centre Gallery at the University of Chicago (curated by Monika Szewcyyk), Catriona Jeffries Gallery in Vancouver and at the Art Gallery of Ontario (curated by Kitty Scott). Duane is represented by Catriona Jeffries Gallery, Vancouver

Jenny Western is an independent curator, writer, and educator based in Winnipeg, Manitoba. She holds an undergraduate degree in History from the University of Winnipeg and a Masters in Art History and Curatorial Practice from York University in Toronto. Jenny has curated exhibitions for Plug In ICA, Urban Shaman: Contemporary Aboriginal Art, the Kelowna Art Gallery, Portage and District Arts Centre, Ace Art Inc., the Manitoba Crafts Council, La Maison des Artistes, the Costume Museum of Canada, and the Art Gallery of Southwestern Manitoba. One of Jenny’s recent projects includes co-curating “Close Encounters: The Next 500 Years,” a multi-venue group exhibition of contemporary Indigenous art from around the globe.