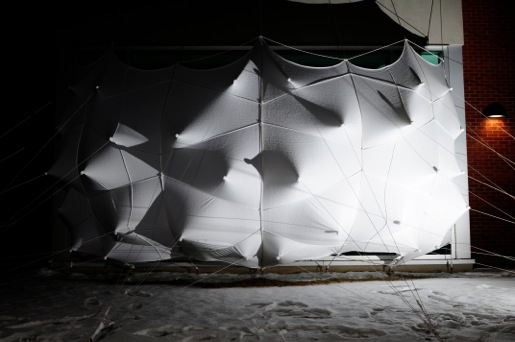 PLATFORM is very excited to announce the second installment of ACTIVE RESEARCH, a quarterly lecture series beginning in January 2013 and culminating one year later. The purpose of this lecture series is to investigate the idea of research as an active practice rather than a passive model. We have approached four cultural workers / researchers / artists to each offer an hour long treatise on their research methodologies and how it informs or relates to their current creative pursuits. The four participants were chosen to reflect the Centre’s interest in artists at various stages in their careers (emerging, mid-career, and established) in addition to their thought-provoking and experimental approaches to research.

The Wet and Flexible

The recent rise of digital software and automated fabrication tools that are now available to architects and designers has helped to offer the possibility for creating biomimetic (like nature) forms and structures. The promise of these new complex and flowing forms, which stand in contrast to the rigid industrialized shapes modernism has offered for the past century, is that these structures might offer greater material efficiency, increased longevity, and a new aesthetic vocabulary for designers to explore.

However, by moving away from traditional mass-produced industrialized dry and brittle materials and assemblies we find ourselves at the edge of another world of form-finding that resides within the wet and flexible; where shapes arise out of a conversation between ideas and material behavior, rather than from an individual will imposed upon them. This approach is both new and ancient and has given rise to new questions about the role of drawing, modeling, and the longevity of what we build in our cities and landscapes.

A small reception will follow the talk @ PLATFORM. The lecture is free, all are welcome to attend.

Lancelot Coar, an Assistant Professor in the Department of Architecture at the University of Manitoba and a researcher at the Centre for Architectural Structures and Technology (CAST), will present his research that explores how the inherent properties of materials can participate in the discovery and creation of new unexpected forms and dynamic behaviors in structures.  His research has resulted in the creation of self-forming structures ranging from wood, fabric, fiberglass, concrete, wax, and ice. His work examines how the design and creation of such structures can emerge from both imagined and fully realized projects within the design studio as well as in the public sphere and in museum and gallery settings.