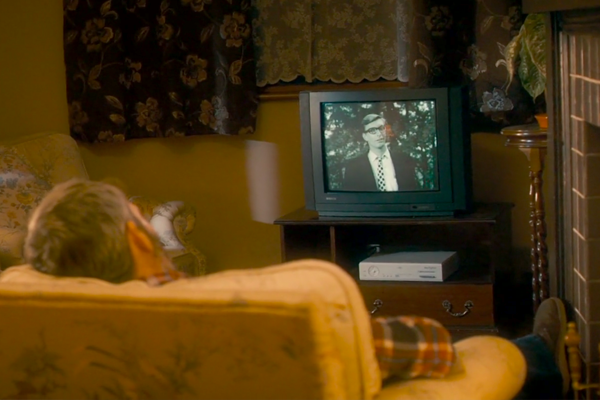 PLATFORM centre , in collaboration with WNDX, is pleased to announce a solo exhibition featuring the work of Dave Dyment (ON). Titled Watching Night of the Living Dead, the show runs from 13 September – 25 October, 2019 with an opening reception scheduled for Friday 04 October at 7 PM. Dyment will give an artist talk at 6 PM before the opening. Both events are free and open to the public.

Watching Night of the Living Dead reanimates the 1968 George Romero classic entirely using footage of characters from other films and television series watching the movie on TV or at the cinema. Originally titled Night of the Flesh Eaters, the producers re-branded it as Night of the Living Dead, at the last minute, to avoid confusion with a similarly titled horror film. The title card was hastily replaced and the copyright symbol was accidentally omitted. This minor clerical error caused the film to immediately fall into public domain, thus denying Romero any royalties from what may be the most lucrative low-budget independent feature ever made, but also ensuring his legacy.

Night of the Living Dead is ground-zero for the contemporary zombie, the last new mythology to be publicly owned. Countless comic books, novels, television series and feature films have used variations on Romero’s walking dead monsters. In addition to the myriad unauthorized sequels and reproductions, the film’s public domain status allows other filmmakers to include clips in their own projects, eliminating the costs and administrative headaches of securing permission to use copyrighted materials.

Watching Night of the Living Dead collects these scenes and arranges them sequentially along a bed track of the original. The characters watching television will sometimes serve as surrogate zombies, staring blankly at the horror unfolding on their sets, but also mirror the protagonists in the original, where most of the plot exposition is delivered via a television news reader.

Dave Dyment is a Toronto-based artist whose practice includes audio, video, photography, performance, writing and curating, and the production of artists’ books and multiples. His work – often labour-intensive and requiring years to complete – is primarily interested in the ways that cultural value is accrued. He mines pop culture for shared associations and alternate meanings, investigating the language and grammar of music, cinema, television and literature, in order to arrive at a kind a folk taxonomy of a shared popular vocabulary.

Dyment’s work has exhibited across the country, as well as New York City, Los Angeles, Philadelphia, London, and Dublin, and sits in many private and corporate collections, and in the libraries of the AGO and National Gallery of Canada. Examples of his work can be seen at www.dave-dyment.com or heard on the YYZ Anthology Aural Cultures or the Art Metropole disk New Life After Fire, a collaboration with Lee Ranaldo of Sonic Youth. He is represented by MKG127.

Images from Watching Night of the Living Dead