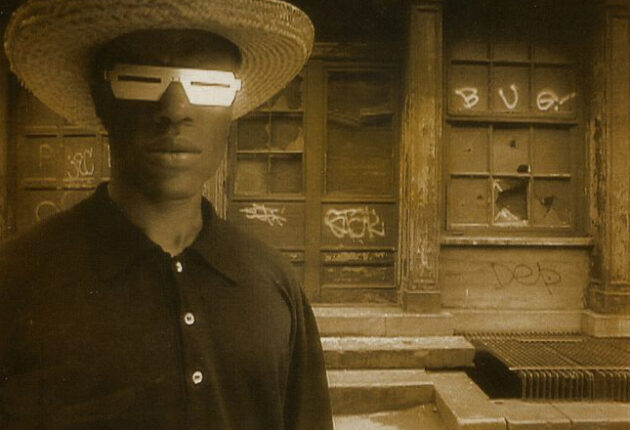 John Akomfrah’s 1997 film The Last Angel of History is an examination of the relationships between Pan-African culture, science fiction, intergalactic travel, and computer technology. This 45-minute cinematic essay examines science fiction (alien abduction, estrangement, and genetic engineering) as a metaphor for the Pan-African experience of forced displacement, cultural alienation and otherness.

“Akomfrah’s analysis is rooted in an exploration of the cultural works of Pan-African artists, such as funkmaster George Clinton and his Mothership Connection, Sun Ra’s use of extraterrestrial iconography, and the very explicit connection drawn between these issues in the writings of black science fiction authors Samuel R. Delaney and Octavia Butler. Included are interviews with black cultural figures, from musicians DJ Spooky, Goldie, and Derek May, who discuss the importance of George Clinton to their own music, to George Clinton himself. Astronaut Dr. Bernard A. Harris Jr. describes his experiences as one of the first African-Americans in space, while Star Trek actress Nichelle Nichols tells of her campaign for a greater role for African-Americans in NASA. Novelist Ismael Reed and cultural critics Greg Tate and Kodwo Eshun tease out the parallels between black life and science fiction, while Delaney and Butler discuss the motivations behind their choice of the genre to express ideas about the black experience. In keeping with the futuristic tenor of the film, the interviews are intercut with images of Pan-African life from different periods of history, jumping between time and space from the past to the future to the present, not unlike the mode of many rock videos or surfing the Internet.” – from Icarus Films

John Akomfrah is a British artist and filmmaker. He co-founded the Black Audio Film Collective with friends while studying at Portsmouth Polytechnic in 1982, and since then has continued his exploration of film through montage, archival materials, and documentary. Centering on themes of migration, diaspora, and identity, Akomfrah’s work brings narratives of black British history into pop culture.

Born in Accra, Ghana on May 4, 1957, Akomfrah lived there until the age of four with his parents, both of whom were anti-colonial activists. He first garnered attention in 1986 for his directorial work in the documentary mosaic Handsworth Songs. Produced for Channel 4 by the Black Audio Film Collective, the experimental film essay does not use a voiceover, and instead lets the audience piece together their own narrative through montage and footage from the Handsworth and London riots of 1985. The film went on to win the BFI John Grierson Award for Best Documentary, and Akomfrah continued producing documentaries for British television throughout the 1980s and 1990s, including Dr. Martin Luther King: Days of Hope (1997) and The Wonderful World of Louis Armstrong (1999). Other notable works include Testament (1988), which premiered at the Cannes International Film Festival, Seven Songs for Malcolm X (1993), The Last Angel of History (1995), Mnemosyne (2010), The Unfinished Conversation (2012), Peripeteia (2012), Vertigo Sea (2015), Purple (2017), and for the first Ghana Pavilion at the 58th Venice Biennale, Four Nocturnes (2019).

Akomfrah has continued to explore themes of diaspora, British society, and collective memory, as well as looking at the presence of colonial residue and contemporary roots in classical literature. His practice has evolved as well, with more recent work taking the form of multichannel large-scale installations. Akomfrah has had solo exhibitions at many institutions worldwide, including the ICA Boston, the New Museum, the San Francisco Museum of Modern Art, Museo Nacional Thyssen-Bornemisza, the Barbican Centre, and the Tate Britain. He currently lives and works in London

IMAGE: still from The Last Angel of History

Images from The Last Angel of History