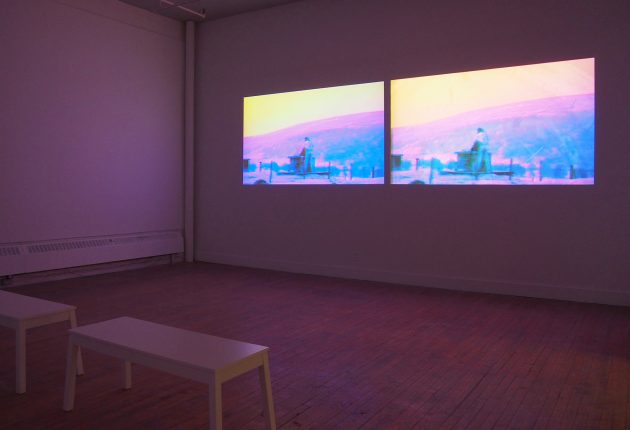 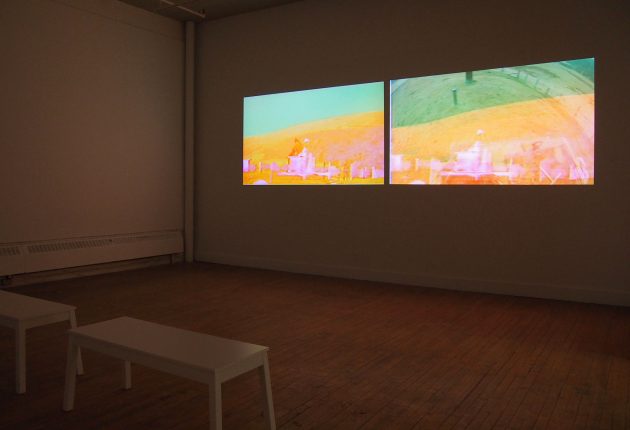 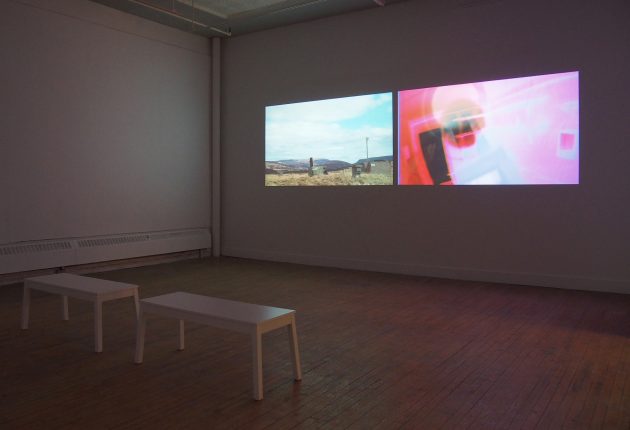 PLATFORM centre is pleased to announce Something Wicked (This Way Comes), a solo exhibition featuring the work of Jillian McDonald (NY). The show runs from 05 January – 17 February 2018 with an opening reception scheduled for Friday 05 January at 7 PM. McDonald will give an artist talk at 2PM on 06 January. Both events are free and open to the public.

Inspired by the growing horror film sub-genre that allegedly includes found footage, The Hatch is a two channel video filmed in Northeast Scotland and starring a real-life “bunker buster”, a recreational Cold War enthusiast who travels the Scottish countryside tracking, breaking into, and exploring scores of identical abandoned bunkers. A series of bunkers are under siege.

Four additional videos share a suspended tension familiar from horror films. This work represents a new direction in McDonalds’s work. Festival flags, strung from a stone clock tower flutter in the wind, a line of fog creeps across wintry landscapes, crows cry out and congregate at dusk, the rooms of an abandoned house seem to breathe in the breeze. In these videos, there are no human characters, plot, or other typical storytelling elements. In these nearly still scenes, slight movements become remarkable and strange. The images pay homage to traditions of landscape painting and photography.

The artist wishes to acknowledge that this work was possible due to The Glenfiddich Canadian Art Prize and International Residency, Signal Culture, The Canada Council for the Arts, and Pace University. McDonald also gives a very special thanks to Andy Fairgrieve. Soundtrack for Spirit by Keri Latimer.

BIOGRAPHY
Originally from Winnipeg, Jillian McDonald lives in Brooklyn and goes north at every opportunity.

Recent solo shows were held at AxeNéo7 in Gatineau, the Esker Foundation in Calgary, Air Circulation in New York, Centre Clark in Montréal, Atkinson Gallery in Santa Barbara, and UWAG in Waterloo. Her work was featured in group exhibitions and festivals at ISIS Arts in the UK, New Media Space in New Westminster, BC, The Edith Russ Haus for Media Art in Germany, The International Biennial of Contemporary Art in Venezuela, The Sundance Film Festival in Utah.

A feature length documentary called Valley of the Deer on CBC’s IDEAS profiles her work, which was also reviewed in The New York Times, Art Papers, The Globe and Mail, The Toronto Star, Border Crossings, and Canadian Art. She appears in books including The Transatlantic Zombie (2015) by Sarah Juliet Lauro and Deconstructing Brad Pitt (2014), edited by Christopher Schaberg.

McDonald received grants and commissions from The New York Foundation for the Arts, The Canada Council for the Arts, Turbulence.org, and The New York State Council on the Arts. She received the Glennfiddich Canadian Art Prize in Scotland, and attended other residencies including the Arctic Circle Residency in Svalbard, the Headlands Center for the Arts in California, Lilith Performance Studio in Sweden, Klondike Institute of Arts and Culture in The Yukon, and the Lower Manhattan Cultural Council’s Workspace in New York.

Images from Something Wicked (This Way Comes)