Lynda Gammon has built for us the latest editions in her long-standing and outstanding and nervy series of recombinant sculptural assemblages known under the rubric Salvaged. These works emerged out of a growing grumble with sculpture and a turn toward photography. Inspired and triggered by a spell in Rotterdam, working in an artists’ studio complex that had earlier been an abandoned box factory. The artists had occupied this warehouse to live in it as well as work, and renovated the monster with thrift and ingenuity. No fleck of space not thought out; a warren of rooms, and rooms within rooms. – Colin Smith 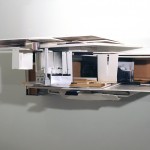