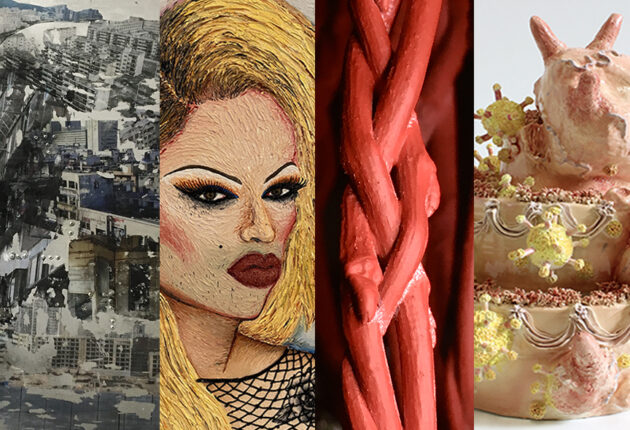 PLATFORM centre is pleased to present the group exhibition 시험 / تست / yeèhdzà / test, featuring work from graduate students from the University of Manitoba’s School of Art. This exhibition features works by Casey Koyczan, Mahsa Merci, Hye Yeon Shin and Julianna Zwierciadlowska-Rhymer. The varied works in the exhibition represent and explore each of their distinct practices and research. The title of the exhibition references the phrase “test” in each of the artists’ languages. 시험 / تست / yeèhdzà / test runs from 06 November – 11 December, 2020.

Due to current MB health regulations the physical gallery is closed to the public. To view the works and installation images, please visit the online version of the exhibition.

Casey Koyczan is a Tlicho Dene interdisciplinary artist from Yellowknife, NT, that works with various mediums to communicate how culture and technology coincide together alongside the political, economic, and environmental challenges that we are presented with. A portion of his large-scale installation work utilizes earth materials to evoke the idea of nature reclaiming architectural space; returning to its original place of being. Inspired by sci-fi and Indigenous Futurisms, Koyczan implements various techniques of interactivity, audio-video, and the engagement of the bodily senses to raise awareness about a variety of topics within his creations.

His artwork has been shown nationally and internationally, and has participated in many residencies, exhibits, festivals and collaboration projects in parts of the world such as Finland, Colombia, Chile, Mexico, and The Netherlands. He is also a musician, producer, filmmaker, actor, writer, teacher, workshop facilitator, graphic designer, web designer and advocate for future generations of artists and musicians.

Mahsa Merci (born in 1990 in Tehran, Iran) holds a Bachelor’s degree in Graphic Design from Tehran University of Art and a Master of Painting from Azad University in Iran. Currently, she is studying Master of Fine Arts in the University of Manitoba, Canada. Mahsa Merci has exhibited her works in over fifty solo and group exhibitions in the United States, UK, Belgium, Canada, Italy, UAE, India, Cyprus, and Iran. Her works are published internationally in various magazines in Iran, the UK, United States, and Norway. She is living and working in Canada.

Hye Yeon Shin was born in Seoul, South Korea. She received her BFA and MFA from Ewha womans University, and also the bachelor degree of Psychology. Hye Yeon has exhibited 3 selected solo exhibitions in Korea, and about 30 group exhibitions there, her art works appear in the gallery collection of Korea.

Hye Yeon is a visual artist exploring the relationships between people and city. Her core research interests include gentrification and redevelopment of residential area in the world and the emotions it evokes. She addresses the contents of philosophical and conceptual thoughts that originated from her experiences and memories through sculpture and installation work.

The important power of Hye Yeon’s work is to lead the viewers to embody and feel their various senses, thoughts, and emotions in the sculptures and installations that seem to be unintentionally arranged. Her private exploration of living in a huge community as a thorough individual is evident through her use of objects abandoned by the individual such as wires, doors, windows, and hangers in her improvisatory works.

Julianna Zwierciadlowska-Rhymer is an emerging artist, born in Winnipeg and raised on the prairies of Southern Manitoba. She completed her first BFA at the University of Manitoba in Art History with honours. In May 2017, she received her second BFA from Emily Carr University of Art and Design in Visual Art. Her works focus primarily in clay, but she also extends her practice to a variety of materials. Julianna is a current MFA student at the University of Manitoba.