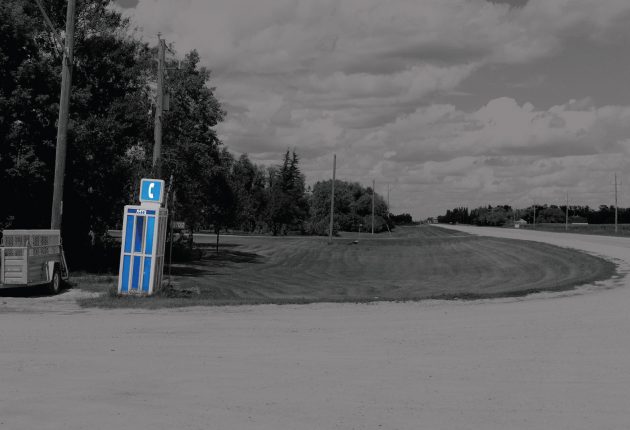 PLATFORM centre — in collaboration with Also As Well Too Artist Book Library & Press — is pleased to announce a new exhibition and bookwork from Jeanne Randolph (MB). The exhibition, titled Prairie Modernist Noir: The Disappearance of the Manitoba Telephone Booth, runs from 16 November – 07 December, 2018. The bookwork (produced and published by Also As Well Too) will be launched at the closing reception scheduled for Friday 07 December at 7:00 PM. Randolph will give an extemporization, the resultant script from which will become the text of the bookwork, on 15 October at 7:00 PM. All these events are free and open to the public.

Prairie Modernist Noir: The Disappearance of the Manitoba Telephone Booth is an exhibition and bookwork that poetically and visually explores and documents the meaning, history, and architecture of the Manitoba telephone booth. Randolph spent six months exploring the province and photographing the last of Manitoba’s telephone booths with an old obsolete iPhone. Notably, MTS itself has also recently become obsolete, with Bell’s takeover of MTS in early 2017. For the exhibition, Randolph turns these images into a ghostly projection that speaks to the disappearance of these structures.

The accompanying bookwork will be a memorial to rural Manitoba telephone booths as vacant, derelict or obsolete buildings. As with Randolph’s other image/text publications, the captions will convey meditations upon the images of these endangered booths, with attention to the environment of the booths, information and/or psychological musing, stories, and imaginative insight. When none are left, this vivid artist book will be an important contribution to Manitoba’s history of technology in the 20th century.

ABOUT THE ARTIST
Jeanne Randolph has been writing, performing for, and contributing to Canadian contemporary visual arts since 1980. Five books of her collected art-writings have been published since 1991. Her fourth book, Ethics of Luxury: materialism and imagination (2007), and her latest book, Shopping Cart Pantheism (2015), addressed consumerist visual culture. Images in Randolph’s books and writings are often selected from a massive collection of photographs she has taken. Randolph has been awarded many national and provincial grants, as well as facilitated numerous art residencies.

ABOUT ALSO AS WELL TOO
Also As Well Too is an artist-run, not-for-profit library and shop for artist books and small press publications. Located in Winnipeg, Manitoba, Also As Well Too is a place for revelry and research that presents exhibitions, lectures, book launches, workshops, and meetings with a focus on one-of-a-kind and multiple bookworks.